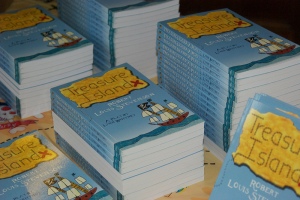 One of Robert Louis Stevenson’s finest tales has been released as a new play for children.

Treasure Island: A Play by Lynn Brittney has been produced by MSc Publishing students at Edinburgh Napier University and illustrated by Scottish school children. The play, which includes a foreword by Michael Russell MSP, uses excerpts from Stevenson’s original text which was first published in 1883.

The new book was launched in the Grand Turmeau Hall, Craighouse Campus, Edinburgh Napier University on Friday. The students hosted a Pirate Party for the children who contributed their artwork to the book, and there was even a real parrot waiting to greet them at the door! The event also had a range of activities such as drawing and face-painting for the young audience. Author, Lynn Brittney, gave a short talk to the children and each child received a free signed copy. The book will be on sale at Waterstones for £5.99 of which roughly £1.50 goes to the Children’s Hospice Association Scotland, who provide hospice services for children and young people with life-shortening conditions.